HISTORY OF THE ATLANTA AD CLUB

In March of 1909, seventy-five of Atlanta’s most prominent business leaders met in the Assembly Hall of the Piedmont Hotel to form The Atlanta Ad Club.  i  The formation of the club was the culmination of the efforts of Atlanta’s pioneer of advertising, St. Elmo Massengale. 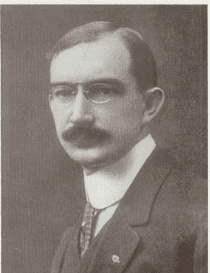 As president and founder of Atlanta’s first advertising firm, Massengale Advertising Agency, St. Elmo fought for industry self- regulation as opposed to government intervention. Marketers were under heavy fire from the government for false advertising claims and producing unsafe products. The Federal Government’s “Pure Food and Drug” agency had been in constant dispute with Asa Candler and Coca-Cola over product claims and the safety of ingredients in Coca-Cola.  ii

Prior to Massengale Advertising, no agency existed in the South. Philadelphia served as America’s center of publishing and advertising and was home to the largest agency, N.W. Ayer. Madison avenue did not yet dominate advertising but sported J. Walter Thompson, the most prominent agency in New York. The country’s largest agency was Lord and Thomas of Chicago, headed by Albert Lasker. 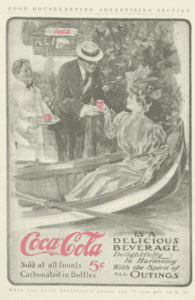 During his lifetime, St. Elmo left an astounding number of achievements creating a legacy that allowed many future Atlanta agencies to prosper. Besides founding Atlanta’s first agency and The Ad Club, St. Elmo was instrumental in the formation of the American Association of Advertising Agencies; built and sold a successful outdoor bulletin company; directed the campaign of Gov. Nat E. Harris; taught at the Georgia Tech School of Commerce; ran the Federal Reserve’s Liberty Bond campaign during World War I; organized the Associated Ad Clubs of the World (now the American Ad Federation); was President and owner of the Coca-Cola bottling company of Kansas City and was one of the original members of the Sphinx Club of New York.

Born in Norwood, Georgia in 1876, he was schooled at the Norwood academy and belonged to a church formed by ancestors of Asa Candler. His father was a prominent merchant.

His family took the Georgia railroad and moved to Atlanta, when St. Elmo was ten. He finished his schooling at The Boy’s High School and completed a course of study at the Goldman-Sullivan Business College. At sixteen, he went to work as a copy boy for The Atlanta Constitution coming into close contact with Henry Grady and Joel Chandler Harris. After a few years at the paper, he used his earnings to attend the Chicago World’s Fair – The Columbian Exhibition. Here his eyes were opened to the wonders of the gilded age as he viewed Edison’s exhibit- the White City, Dr. Ferris’s creation -the ferris wheel, and the gardens of Frederick Olmstead, designer of New York’s Central Park. Returning to Atlanta he took a job as advertising manager of the Wesleyan Advocate magazine. As advertising manager he traveled to advertising agencies in the north, selling space for his publication and learning the operation of advertising agencies.  iii 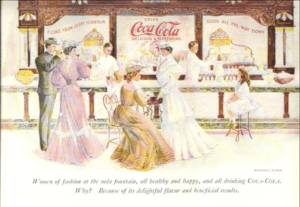 At the age of twenty, he opened the doors to the Massengale advertising agency, renting space for the operation in the Gould building. He built a vast library of publications and rate tables in order to secure the best placements nationally for his clients. Over the next several years the agency continued to grow and by 1900 employed over 20 people and now resided in the Austell building. In 1903, the agency was recognized by acceptance in the Newspaper Publishing Association, an acceptance that was not easy to get and solidified the credentials of his Agency. He had a long client list that included medicine houses, banks, colleges and tobacco houses.  iv

In 1904, Massengale was appointed by Coca-Cola to serve as its first advertising agency. Massengale launched a national campaign that ran in newspapers and magazines such as Collier’s, The Saturday Evening Post and the Christian Advocate. At the time Coca-cola was positioned primarily as a beverage sold at soda counters and targeted as a drink of the affluent. 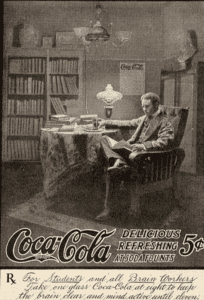 The Coke account allowed the Agency to surge in growth. Coke’s president, Asa Candler was searching for investment opportunities with the large fortune he was amassing from Coca-Cola. In 1906, Asa opened the opulent Candler Building on the north end of town, away from the train station and the Whitehall shopping district. Massengale directed the advertising efforts for the building and moved his agency to the 16th floor.

Meanwhile, Coke was encountering increasing difficulties with the government. There were also internal political battles that were brewing. Samuel Dobbs had operated as a traveling salesman for the Coca-Cola effort and had developed a close friendship with William D’Arcy in St. Louis. Dobb’s view on the positioning of Coke contrasted sharply with Frank Robinson’s and Massengale’s. In 1906, Dobbs was successful in getting the advertising duties to be shared with D’Arcy who handled the account until the advent of television when it went over to McCann Erickson.  v

Asa Candler for his part, continued his association with Massengale. They both shared a fascination with the emerging automobile. Local clubs of enthusiasts sponsored “across the state” races and Massengale and his Overland were regular participants. In 1909, Candler decided to build an auto raceway to rival the Indianapolis raceway. It was on the site of the current Hartsfield-Jackson airport and was known as The Candler Speedway. The Massengale Agency handled the advertising for the raceway.  vi

In 1910, Massengale formed the Massengale Bulletin Company. The company became one of the premier quality outdoor firms in Atlanta featuring lighted boards and landscaping around them. His brother Roscoe became president of the company and it was later sold to Thomas Cusack Outdoor of Chicago in 1920. 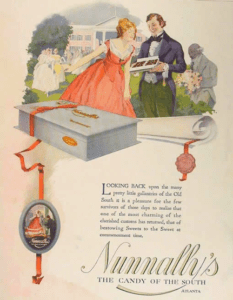 Massengale picked up the Red Rock Cola account along with Nunnally’s Chocolate. He developed taglines for them such as “ Say Red Rock, Say it Plain” and “None Like Nunnally’s”. Around this time, Massengale also began to get involved in politics. He served as campaign manager for Governor Nat. E. Harris in 1914 and was secretary on the Democratic committee for Woodrow Wilson the following year. This involvement led to the return of political favors as he handled the tourism campaign for the state of Georgia and was appointed to the board of the Western and Atlantic railroad.  vii  He was also awarded the advertising for the Federal Reserves 3rd Liberty Bond program during WWI. 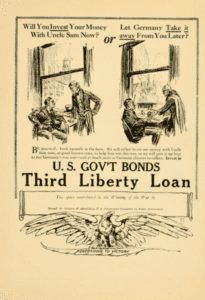 St. Elmo was admitted to the prestigious Advertising Club of New York, the Sphinx club. Through his association here and with the Liberty Bond program he and Tom O’Shaunessey became good friends. In 1917, they formed the American Association of Advertising Agencies. Tom O’Shaunessey served as its president and St. Elmo was on the initial board and his agency was admitted as one of the charter members.  viii

Massengale had handled the advertising for Georgia Tech and he was a close person friend of its president, Dr. Matheson. St. Elmo was invited to teach advertising at the Georgia Tech School of Commerce. Around this same time St. Elmo became interested in St. Simons Island. He purchased a home, where he spent his summers and also picked up the advertising for the St. Simons hotel. Today, the site of his former home is now Massengale Park and is the public beach access that exists just north of the King and Prince Hotel.  ix

In 1921, the 25th anniversary of Massengale Advertising was celebrated with an event at the Druid Hills country club attended by over 200 businessmen. In attendance and delivering speeches were Asa Candler, Dr. Matheson, James O’Shaughnessey, and E.E. Dallis.  x

In 1924, the Massengale agency assisted one of Asa Candler’s sons in a venture - The Atlanta Biltmore hotel. This led to the Agency’s growing involvement in a real estate bubble, with eerie echoes of our current times, The Massengale Agency began to get very involved in the Miami Real Estate boom of the mid-twenties. The Agency opened a branch office in Miami and served as agency for Hollywood Realty Co., JLR Realty Co. and the H.B. Schulte Realty Co.  xi

When the Florida real estate market collapsed in 1926, St. Elmo was caught up in it. His agency struggled for the next few years until St. Elmo became stricken with medical problems. He underwent surgery in the summer of 1929 and never fully recovered, dying in August of that year.  xii

His brother Raymond tried to continue the agency but could not manage it in the face of the economic challenges of 1929. In 1930, The Massengale Agency was purchased by R. Winston Harvey. The firm operated under the name of Harvey-Massengale for an additional 30 years.

The Atlanta Ad Club celebrated its 100th anniversary with a Homecoming event on May 7, 2009, held at Cox Enterprises.

The Atlanta Ad Club continues today, and functions much as its founder intended 100 years ago, providing a forum for advertising men and women of Atlanta to gather, share ideas and promote the advertising industry.